Facebook Ad Targeting: What Do All These Changes Mean to You?

If you’ve been following the news recently, you’re probably aware that Facebook has been in a bit of trouble. Various scandals and investigations have exposed issues surrounding Facebook’s advertising targeting options and data privacy.

In response, Facebook has made a flurry of changes to their advertising options over the past year. Recent headlines are full of alarming news about the social media platform removing thousands of ad targeting options, but what does that really mean for your business?

First, let’s get to the bottom of how Facebook gets its targeting data, and why they’re making these changes in the first place.

Where Does Facebook’s Targeting Data Come From?

Facebook is known for having the most detailed targeting options of any online advertising platform. Especially when it comes to user interests and behaviors, Facebook’s targeting can be so detailed, it’s creepy.

Where does all this information come from?

As a business, you probably have some information about your customers already, including things like their email addresses. If you want to reach those people on Facebook, you can upload your data, and Facebook will find accounts that match (without telling you exactly who matched). You get a targeted ad campaign, and Facebook gets even more data about its users that you provide.

Information from websites and apps that use Facebook services

Beyond that, businesses that advertise on Facebook often put a Facebook Pixel on their websites, which tells Facebook what pages you’re looking at on that website. For example, if an online retailer uses a Facebook Pixel, Facebook could tell if you looked at a particular shirt, or put a pair of shoes in your shopping cart.

In the wake of growing criticism, Facebook announced in May of 2018 that they are shutting down Partner Categories.

So why is Facebook making changes to their advertising options in the first place?

Between various scandals and CEO Mark Zuckerberg testifying in front of Congress, Facebook’s data privacy and advertising practices have been under close scrutiny over the past couple years. We’ve assembled a brief timeline to explain the key controversies surrounding Facebook, and the major changes they’ve made to their ad targeting in response.

ProPublica, a nonprofit investigative journalism group, found that Facebook allowed advertisers to create ads that excluded users based on race, which goes against the federal Fair Housing Act. This prompted the U.S. Department of Housing & Urban Development to begin a preliminary investigation of Facebook’s advertising and targeting options.

In response to the ProPublica report, Facebook announced that it was disabling Ethic Affinity categories for housing, employment, or credit-related ads. They also promised to update their advertising policies and provide more education to help advertisers in these categories avoid discriminatory ads.

Following up on their earlier promises, Facebook soon announced stronger enforcement of diversity practices, including algorithms to disapprove potentially discriminatory ads, and required self-certification for advertisers in housing, employment or credit categories.

A few months later, ProPublica published another article, this time revealing that Facebook allowed anti-Semitic ads based on topics like “Jew hater,” and “How to burn Jews.” These ad categories were likely automatically generated by Facebook, based on information that people listed on their profiles. 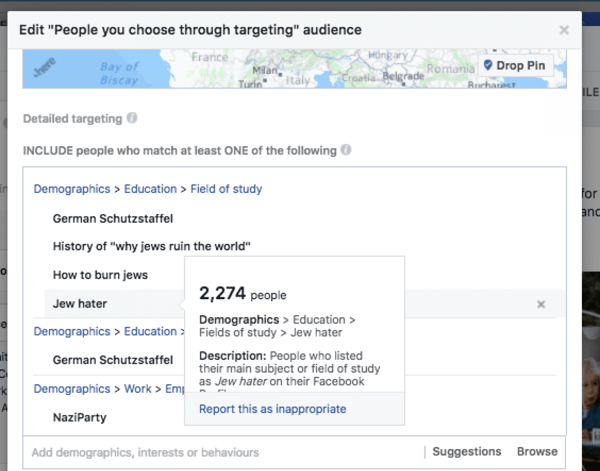 Because offensive ad categories were created from information on users’ profiles, Facebook removed more than 3 million self-reported terms from ad targeting. These included fields like school, field of study, employer, and job title.

During their investigation of Russian influence in the 2016 presidential elections, Congress found that Russia-based advertisers had purchased political ads to polarize American voters.

Amidst investigations of the 2016 elections, reports surfaced that Cambridge Analytica, a political data firm hired by the Trump campaign, gained access to personally identifiable information for more than 87 million Facebook users. This sparked public outcry and raised issues about Facebook’s data collection and privacy.

March 2018 – Facebook announces it is shutting down Partner Categories

In the wake of Cambridge Analytica, Facebook announced that they were shutting down Partner Categories. While not directly involved in the scandal, Partner Categories gave Facebook access to a huge amount of behavioral data, which could be seen as creepy or downright invasive of user privacy.

With all the scandals going on, CEO Mark Zuckerberg was called to testify before Congress. During his testimony, he re-affirmed the importance of privacy, and took responsibility for the misuse of Facebook tools for “fake news, foreign interference in elections, and hate speech, as well as developers and data privacy.”

Next, Facebook announced that they were reviewing their ad targeting options to keep advertising “safe and civil.” The result: removing thousands of targeting options, primarily exclusions related to race, ethnicity, sexual orientation, and religion.

While Facebook’s official newsroom generally gets the media’s attention, their developer blog sometimes flies under the radar. In early August, the blog announced reinstated professional targeting options for job titles, employers, field of study, and education, as well as a new category for Facebook Page Admins.

Most recently, the Department of Housing and Urban Development filed an official complaint against Facebook, claiming discriminatory ad options violate the Fair Housing Act. This is the result of the same investigation that ProPublica sparked in 2016. In response, Facebook announced that they are removing over 5,000 targeting options.

Many of Facebook’s announcements have been pretty vague about exactly what ad targeting options they’re removing. Plus, it takes time for them to roll-out major updates, so many of these changes are still in process.

However, Facebook is now flagging discontinued targeting options and requiring users to change them before ads can continue to run. 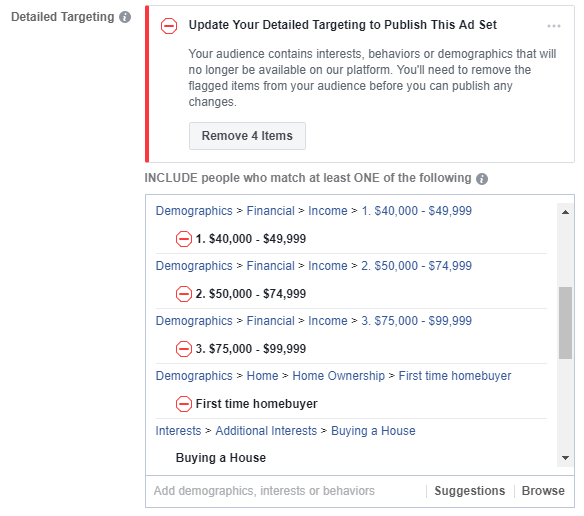 What Do These Ad Targeting Changes Mean?

Despite all the doom and gloom headlines, Facebook still has an enormous amount of information about its users. Again, people spend a ton of time on Facebook (and Instagram). Think about how all your posts, clicks, comments, messages, groups, friends, and more. How much do they say about you and your interests? Probably a lot.

Don’t believe it? You can actually view and download all of your Facebook data, so you can see just how much Facebook knows about you. It’s a little scary, but remember that you can adjust your privacy settings.

So yes, targeting options are changing, but at the end of the day, Facebook still has plenty of data for advertisers to focus in on a specific audience.

2. Review and update any current ads

Some of these ad changes were announced months ago, but they’re still rolling out. So if you’re actively using Facebook advertising, review your current ads to make sure your targeting options are still valid.

Facebook has gradually been removing discontinued options from campaign creation and editing, but as of October 1, 2018, they will no longer deliver campaigns using Partner Categories.

3. Get more creative with your targeting

If you relied on Partner Categories or other targeting options that are no longer available, you still have other options. Advertisers just need to get more creative about how they’re identifying and reaching their target audience.

For example, let’s say you were targeting new homeowners – a category that is no longer available. Instead, you could look for people with interests like “buying a house,” “starter homes,” or “realtor.com.” Then look for a life event called “Recent Moved.”

This isn’t the first time Facebook has changed its ad targeting, and it definitely won’t be the last. Facebook is constantly changing, and whoever is managing your Facebook account needs to stay up-to-date on the latest updates and continually make adjustments along the way.

If your business is struggling to keep up with everything going on with Facebook, we’d love to help. Our social media experts have gained even more experience lately from updating ad campaigns after all these changes (thanks, Facebook). Let’s talk about how our Facebook marketing services can take the headache out of managing your social media presence.